Centre of Culture and Art 'Muza' 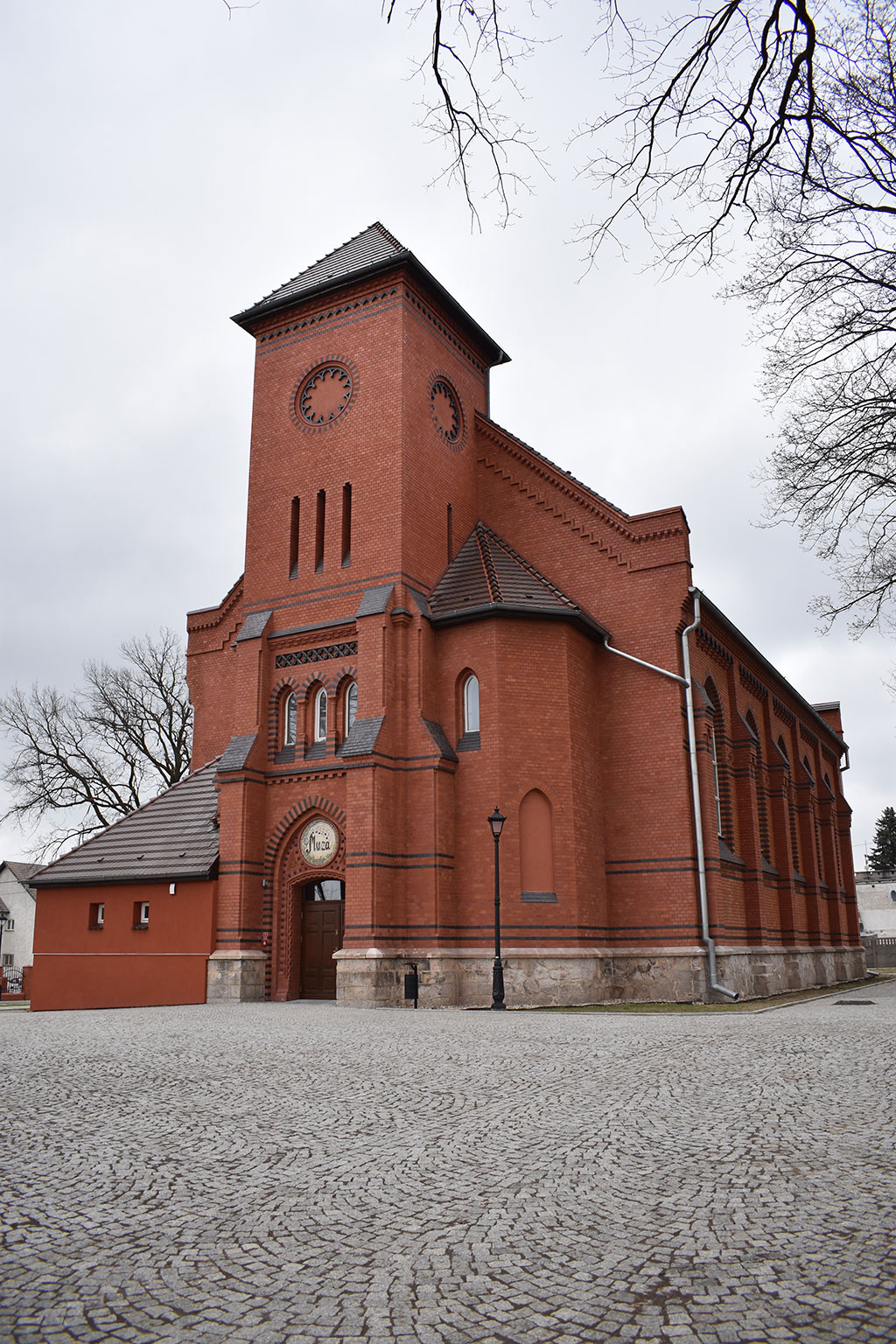 The neo-Gothic building of the Centre for Culture and Art ’Muza’ is located at 39 Lubańska Street in Nowogrodziec. Hence, a few minutes' walk leads residents and guests to the Nowogrodziec Market Square, where proudly presents one of the most recognizable spatial elements of the city – the famous all over Poland Great Garniec.

The history of the present-day location of the 'Muza' began in 1885, when on the 17th of July, in the presence of pastor Frederick William Bock, the foundation stone for the construction of an Evangelical church was laid. Three months later the roof truss was erected and on the 26th of May 1886 the bells were consecrated. On the same day, documents and memorabilia were placed in the tower knob and a cross was placed on the top. The whole investment was completed in less than a year and a half and so, on November 10, 1886, the evangelical community of Naumburg am Queis was given a ready-made new temple. On October 16, 1903, a large clock designed by a locksmith named Patzold appeared on its tower. From that moment on, it measured the local time, and because of its location was most visible to the inhabitants of the Przedmieście Górne and the Piasek[1].

The church served the evangelicals until 1945. The consequences of the extremely destructive and tragic military actions that took place during the Second World War were also not overlooked by Nowogrodziec and the architectural monuments located in the city. Many of them were permanently destroyed and some of them changed their purpose, adapting to the needs of the local environment. This was the case with the discussed building, which functioned as a sports hall for almost 30 years of the 20th century.

The inability to expand the facility and create appropriate conditions for physical activity caused that after building a modern sports hall in Nowogrodziec, the old one located within the walls of the historic church, was excluded from this form of activity and for several years was used in a minimal extent. The progressing process of property degradation, with constant maintenance costs, was the reason for the decision to thoroughly modify the building to create a modern and multifunctional venue. However, the renovation work undertaken in 2002 intervened too deeply in the architecture of the form and led to a deterioration of its aesthetics.

At the beginning of April 2017, Robert Relich, Mayor of Nowogrodziec, signed an agreement covering construction works aimed at transforming the building into a multifunctional hall of cultural and artistic character, which will host over 220 guests. It is worth mentioning that not only the building itself, but also the area around it has been renovated. A parking lot has been created, as well as a place for organising outdoor events. The former entrance to the hall was also reconstructed from the side of the route at Lubańska Street.

The fact that a worthy purpose has been found for an object with such a rich history is very satisfying. It can be successfully used to organise concerts, exhibitions, performances, conferences and film screenings. The hall is equipped with modern electroacoustic devices, which allow for professional sound system for a wide range of events. The Commune and the City of Nowogrodziec have gained space for exchanging thoughts and experiences concerning broadly understood culture and art.